The Sample Sale Guys have competitively built the most recognized sample sale events in our industry. Traveling coast to coast, we have professionally conducted and managed over 300 highly successful sales events in cities across Canada including Toronto, Vancouver, Edmonton, Calgary, Montreal, Saskatoon, Winnipeg, London, and Ottawa. The events last between 3 and 5 days, with typical attendance ranging from 15,000 to 30,000 people per event.

We understand that brands and retailers face challenges in terms of overstock inventory. Our partnership focuses on providing strategic solutions in these four areas:

Designer brands recognize the advantage of running an event with The Sample Sale Guys for many reasons. We understand that brands require a solution for their excess inventory. We have created the largest physical sample sale events that turn inventory into instant revenue. 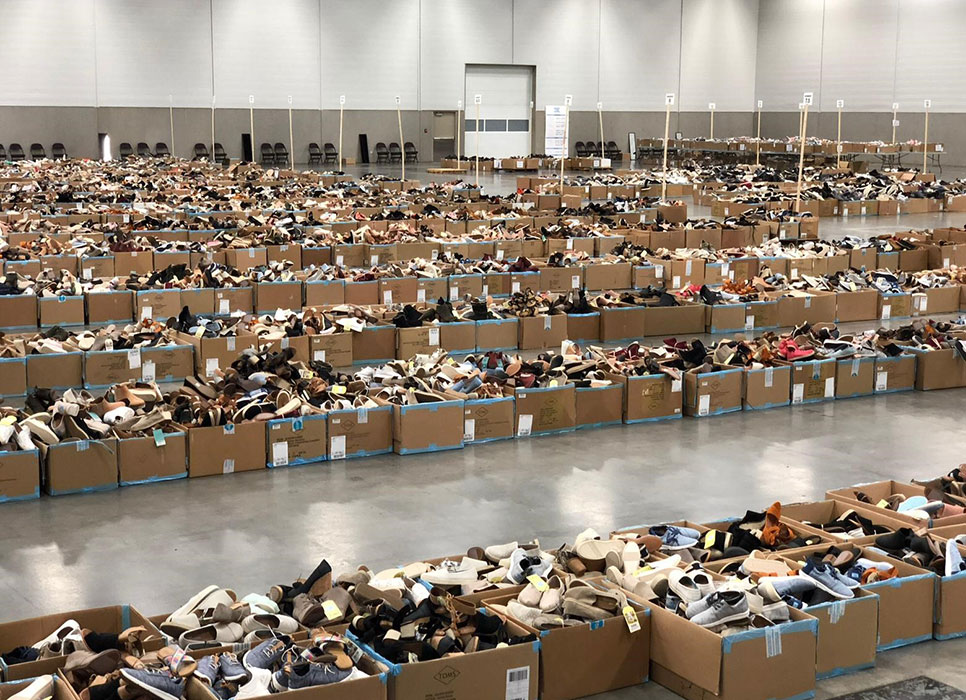 You provide the inventory; we do the work. The Sample Sales Guys’ expertise is in operating logistics, marketing, staffing/management, and tracking of sales with our partner brands. We take great pride in our ability to offer designer merchandise at up to 80% off retail, while maintaining the brands’ high-value integrity.

Are you looking to sell your inventory for instant revenue? The Sample Sale Guys will evaluate your inventory and purchase the merchandise or find the best solution for you.

We invest in a wide range of designer products, including apparel, outerwear, handbags, backpacks, small leather goods, accessories, and footwear. We provide a full range of sizes for both men’s and women’s apparel (XS-2XL) and footwear (EUR 35-47).

Do you want to participate in our events? The Sample Sale Guys partner with distributors and retailers to sell inventory on consignment. The goods are placed in our care with the intent to sell out and the consignor retains ownership of all the items remaining at the end of the event. This opportunity allows for participation without the incurring of overhead costs. We operate based on percentage of sales; therefore, if we don’t generate sales, we don’t get paid.

Since 2015, The Sample Sale Guys hosted over 15 TOMS Warehouse Sales across nine Canadian cities, allowing the brand to focus on its core business.

The Sample Sale Guys has generated over $12M in revenue, selling over 500,000 shoes for women, men, and children.

Since 2008, The Sample Sale Guys have executed over 90 successful winter parka events across Canada for women, men and children. These sales carry multiple brands and have generated over $30M in revenue.

Canada’s leading outerwear designers rely on The Sample Sale Guys’ partnership to sell their surplus inventory while maintaining their highly-coveted brand status and negligible impact on their authorized retailers.

Since 2012, Fred Perry Canada has depended on The Sample Sale Guys to exclusively purchase its overstock inventory.

This has allowed Fred Perry to increase revenue and improve its warehousing storage capacity while focusing on the next season’s designs.

Diesel Canada partnered with The Sample Sale Guys to purchase its overstock inventory.

TOP 10 REASONS WHY BRANDS CHOOSE US

1
Successfully generate multi-million dollars in revenue for numerous brands in just one weekend event.
2
Prevent your merchandise from being resold online or displayed in outlet stores at discounted prices.
3
Risks are minimal, as we finance the entire event.
4
“Here today, gone tomorrow” – events last just 3-5 days, limiting the risk of affecting other retailers.
5
Successfully sell inventory without advertising the discounted pricing within our loyal consumer community.
6
Receive your revenue payment within 48 hours of the event.
7
Often, we offer a guaranteed revenue dollar minimum or we purchase the product.
8
Our new advanced POS systems allows you to track daily revenue, including the product breakdown.
9
We have a 100% loyalty rate with our customer accounts. We take pride in our strong vendor relationships.
10
No returns, exchanges, or warranties. All sales are final on products sold.

The Sample Sale Guys did the first Buscemi sale in Toronto, February 2017. They are professional, have integrity and are well organized. Our sample sale exceeded expectations and we have formed a strong partnership.

The Sample Sale Guys hosted our first ever Versace Sample Sale in Canada, December 2017. I was very impressed how well the sale was professionally organized. They exceeded our revenue expectations by 300% with a sell through rate of 95%.

When The Sample Sale Guys call us to say “I would like to come by your warehouse to buy overstock inventory” it means time to plan a long vacation, because we have nothing to do in an empty warehouse.

We just started with The Sample Sale Guys this past season and were very happy with the results of the sales. Their execution was seamless and am looking forward to increasing our business with them in the future. Levy Canada Brand Manager

It has been a true pleasure working with The Sample Sale Guys. Their level of professionalism and deep understanding of the industry has been a major contribution factor in making our business relationship seamless and fluid.

In 2003, what started with a modest investment of $2,200, President Warren Goldstein quickly grew a profitable eBay business selling Juicy Couture at discounted pricing. Building on his success, he expanded to apparel brands and invested his savings to opening Canada’s first designer outlet store, named Branded Boutique.

Despite the controversy of brands opposing discounted pricing on their designer goods, Warren took a chance in changing retail in Canada. He believed that selling high volume with lower margins would be much more profitable. With drive and determination, Warren approached Saks OFF 5th (in the United States) to work in partnership, by purchasing liquidated inventory at discounted prices to sell to his Canadian consumers. Warren’s vision was to create an equal playing field with Canadian and US consumers. It wasn’t until a decade later, in 2016, that Saks OFF 5th opened its first store in Canada.

Ultimately, inventory sold so quickly that Warren couldn’t keep up with the demand and was forced to close during the week. Every time new inventory arrived and the store reopened to the public, large lines formed. This was when he developed the concept of flash sales, as he understood customers’ shopping habits and the concept of “here today, gone tomorrow.”

Warren executed his first flash sale selling Ed Hardy apparel, located at 161 Spadina Ave. in Toronto. The success was instant, with a 2-hour lineup of customers trailing down the street. Warren’s understanding of trends and unparalleled willpower resulted in a relatively new concept of flash sales. Thus, The Sample Sale Guys was created. Since the first event, The Sample Sale Guys has originated over 300 events. Brands and retailers have recognized the opportunity that the business presents, and The Sample Sale Guys have inspired partnerships with over 80 brands and retailers in every major city in Canada.

In October 2018, a new POS system was introduced for the merchandise. This substantial investment opened doors to accommodate new collaborations with brands. Warren estimates that over the years, he has proudly helped saved customers over $60 million in savings on designer goods and apparel. Our best years are still to come as we continue to embrace fashion and represent a luxury lifestyle for consumers!